In this document, we'll do a deep-dive on CloudSkew's building blocks while also discussing the lessons learnt, key decisions & trade offs made (this living document will be frequently updated as the architecture evolves). The diagram below represents the overall architecture of CloudSkew. 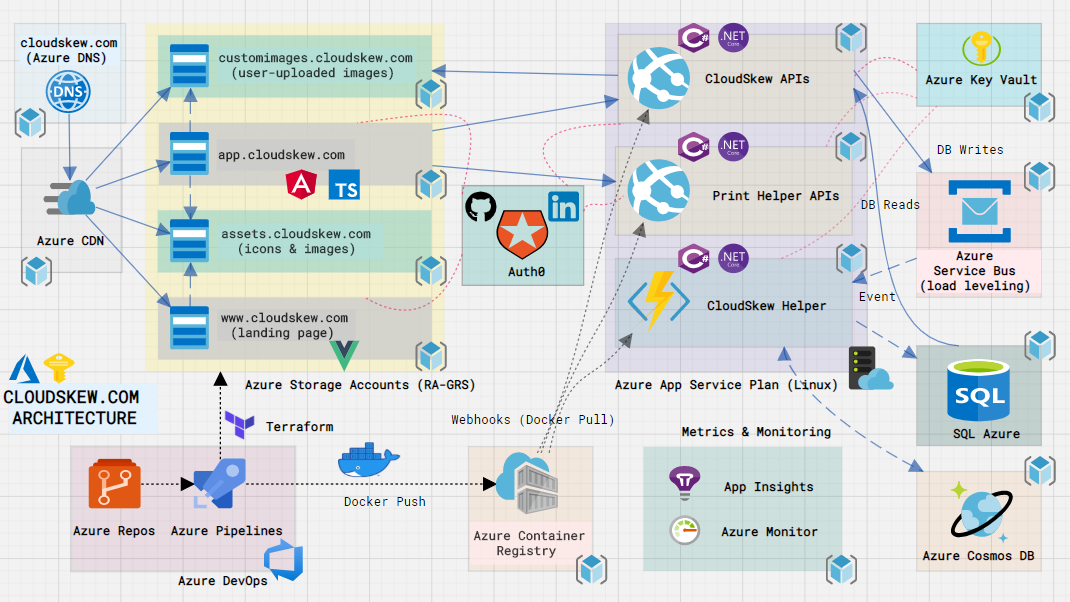 CloudSkew's infrastructure has been built on top of various Azure services - snapped together like lego blocks. Let's now take a look at the individual pieces.

The video below recaps how CloudSkew was built. You can skip reading the rest of the article and watch this video instead!

At it's core, CloudSkew's front-end consists of two web apps:

The web APIs are stateless and operate under the assumption that they can be restarted/redeployed any time. No sticky sessions & affinities, no in-memory state, all state is persisted to DBs using EF Core (opens new window) (an ORM).

Separate DTO/REST and DBContext/SQL models are maintained for all entities, with AutoMapper (opens new window) rules being used for conversions between the two.

Auth0 (opens new window) is used as the (OIDC compliant) identity platform for CloudSkew. Users can login via Github or LinkedIn; the handshake with these identity providers is managed by Auth0 itself. Using authorization code grant (with PKCE), ID and access tokens (JWTs) are granted to the diagram editor app. Auth0's Angular SDK (opens new window) makes all this really trivial to implement. All calls to the back-end web APIs use the access token as the bearer. 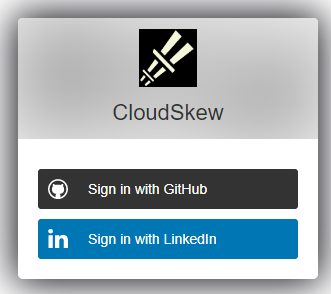 Auth0 creates & maintains the user profiles for all signed-up users. Authorization/RBAC is managed by assigning Auth0 roles (opens new window) to these user profiles. Each role contains a collections of permissions that can be assigned to the users (they show up as custom claims in the JWTs).

Because of CloudSkew's auto-save feature, updates to the Diagram table happens very frequently. Some steps have been taken to optimize this:

For the preview version, the SQL Azure SKU being used in production is Standard/S0 with 20 DTUs (single database). Currently, the DB is only available in one region. Auto-failover groups & active geo-replication (read-replicas) are not being used at present.

Azure CosmosDB (opens new window)'s usage is purely experimental at this point, mainly for the analysis of anonymized, read-only user data in graph format over gremlin APIs (opens new window) (more details on this will be shared in a future article). Technically speaking, this database can be removed without any impact to user-facing features. 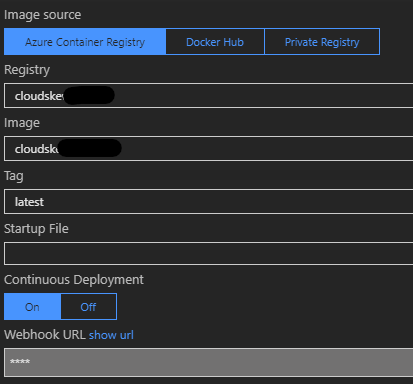 An Azure CDN profile (opens new window) is provisioned with four endpoints, the first two using the hosted front-end apps (landing page & diagram editor) as origins and the other two pointing to the storage accounts (for icon SVGs & user-uploaded images).

Custom domain HTTPS is enabled and the TLS certificates are managed by Azure CDN itself (opens new window). 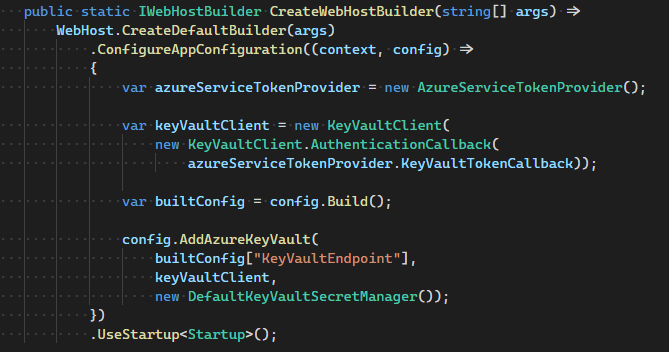 Even after debouncing calls to the API, the volume of PUT (UPDATE) requests generated by auto-save feature causes the SQL Azure DB's DTU consumption (opens new window) to spike, resulting in service degradation. To smooth out this burst of requests, an Azure Service bus (opens new window) is used as an intermediate buffer. Instead of writing directly to the DB, the web API instead queues up all PUT requests into the service bus; to be drained asynchronously later.

The Application Insights SDK (opens new window) is used by the diagram editor (front-end Angular SPA) to get some user insights.

E.g. We're interested in tracking the names of icons that the users couldn't find in the icon palette (via the icon search box). This helps us add these frequently searched icons into the palette later on. 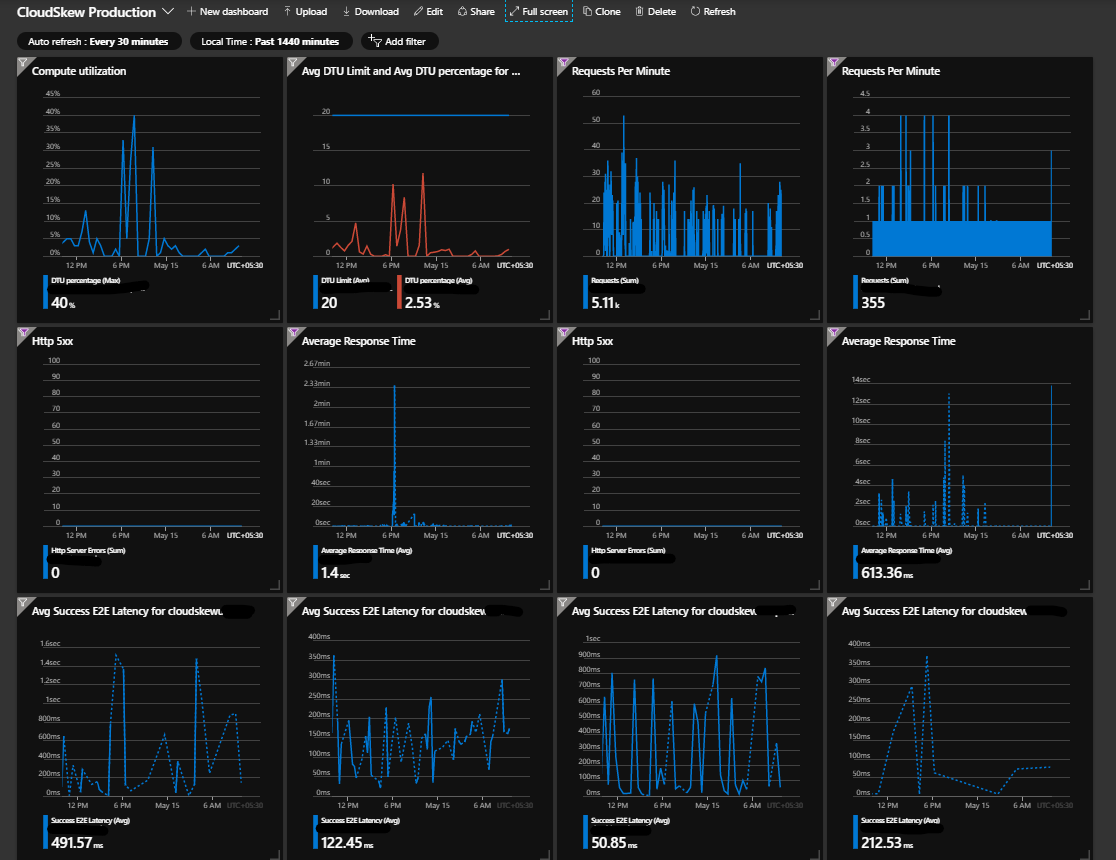 Metrics are evaluated/sampled at 15 mins frequency with 1 hr aggregation windows.

Currently, 100% of the incoming metrics are sampled. Over time, as usage grows, we'll start filtering out outliers at P99.

Terraform (opens new window) scripts are used to provision all of the Azure resources & services shown in the architecture diagram (storage accounts, app services, CDN, DNS zone, container registry, functions, sql server, service bus etc). Use of terraform allows us to easily achieve parity in dev, test & prod environments. Although these three environments are mostly identical clones of each other, there are some minor differences:

The Auth0 tenant has been set up manually since there are no terraform providers for it. However it looks like it might be possible to automate the provisioning using Auth0's Deploy CLI (opens new window).

CloudSkew's provisioning script are being migrated from terraform to pulumi (opens new window). This article will be updated as soon as the migration is complete.

The source code is split across multiple private Azure Repos (opens new window). The "one repository per app" rule of thumb is enforced here. An app is deployed to dev, test & prod environments from the same repo. 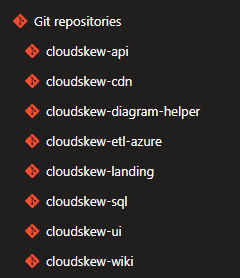 Azure Pipelines (opens new window) are used for continuous integration: checkins are built, unit tested, packaged and deployed to the test environment. CI pipelines are automatically triggered both on pull request creation as well as checkins to master branches.

The deployment & release process is very simple at moment (blue-green deployments, canary deployments and feature flags are not being used). Checkins that pass the CI process become eligible for release to production environment.

As more features will be added and as usage grows, some architectural enhancements will have to be considered:

Again, any of these enhancements will ultimately be need-driven.

CloudSkew is in very early stages of development and there are some simple thumb rules it abides by:

When CloudSkew reaches critical mass in the future, this playbook will of course have to be modified.

Please feel free to email us in case you have any questions, comments or suggestions regarding this article. Happy Diagramming!